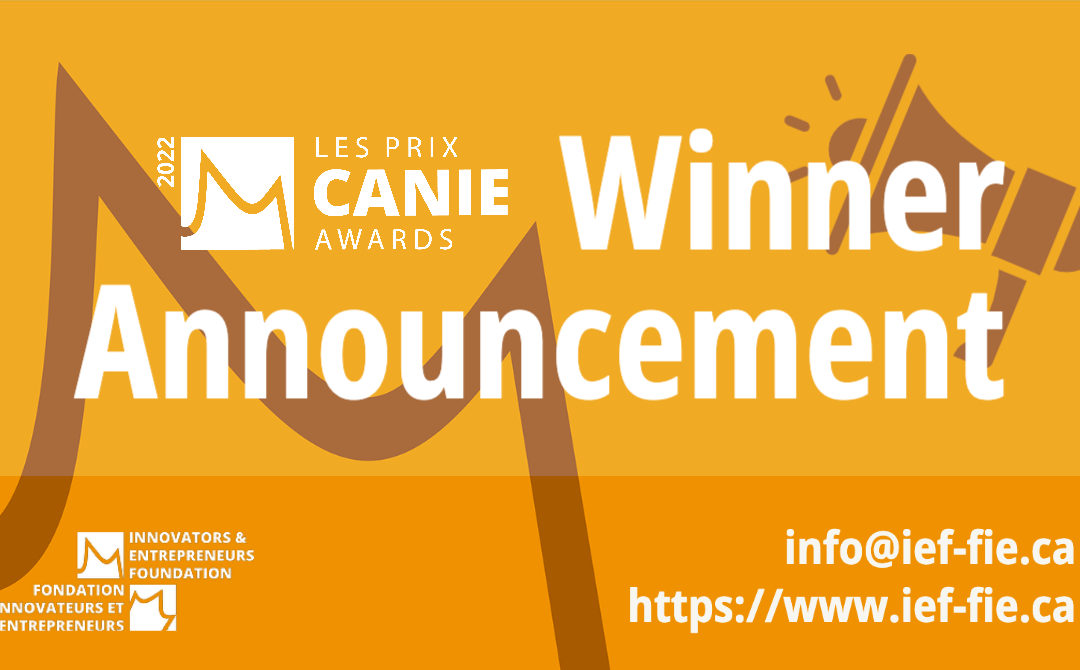 On November 16, 2022, we announced the talented winners of the 40th Annual CANIE Awards, presented in partnership with UPS Canada. Many Canadians tuned in during the live airing of our much anticipated 2022 CANIE Awards Virtual Grand Finale Gala to cheer on all the semi-finalists and winners as they were revealed. Did you miss the gala? Tune in here!

Check out our seven incredible 2022 CANIE Award winners. Each are exemplars of our nation’s social innovation, resilience, and entrepreneurial success! 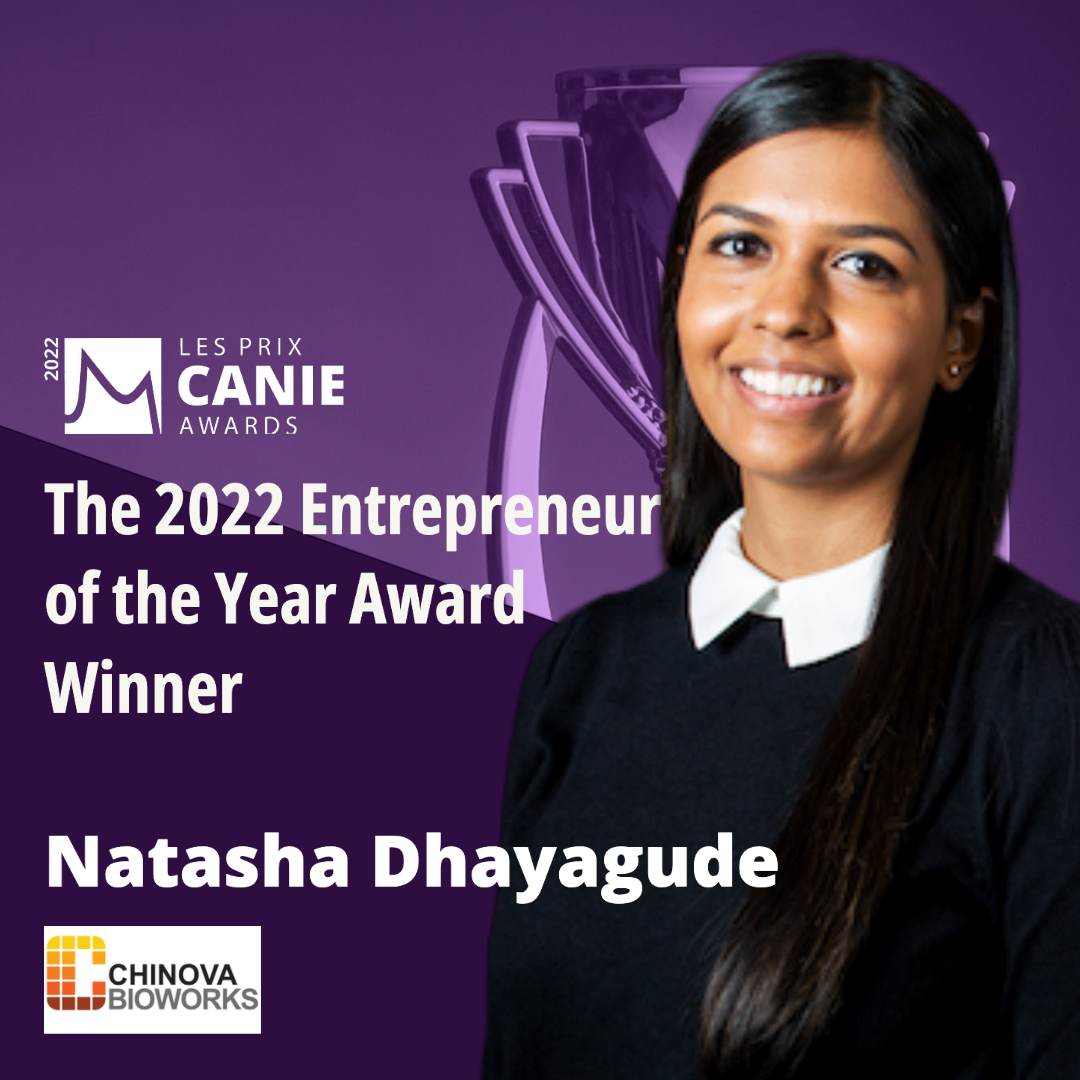 ENTREPRENEUR OF THE YEAR AWARD, SPONSORED BY OWNR

Natasha Dhayagude immigrated to Canada at the age of 10 and graduated from the University of New Brunswick with a degree in biochemistry. Natasha met on of the co-founders, David Brown, at Planet Hatch, an entrepreneurship accelerator and incubator center in Fredericton, and found a common interest in the science of mushrooms, reducing food waste and sustainable solutions for clean-label ingredients. From their partnership, Chinova Bioworks was born.

Natasha has received many honours recognizing her innovative and entrepreneurial success throughout her career, including the Startup Canada’s Woman Entrepreneur of the Year 2019, Atlantic Business top 30 under 30, 2019, The Innovators & Entrepreneurs Foundation Product Innovation of the Year CANIE Award in 2020, and the Thrive Female Founder Award in 2021.

Chinova Bioworks has developed a natural preservative using mushroom chitosan. Chitosan is a biopolymer with a long history of use in food and cosmetics and is a healthy fibre. Chinova’s mission is to use nature to reduce food waste and increase product shelf life. Chinova’s solution to increased food security is through its revolutionary mushroom preservation technology. 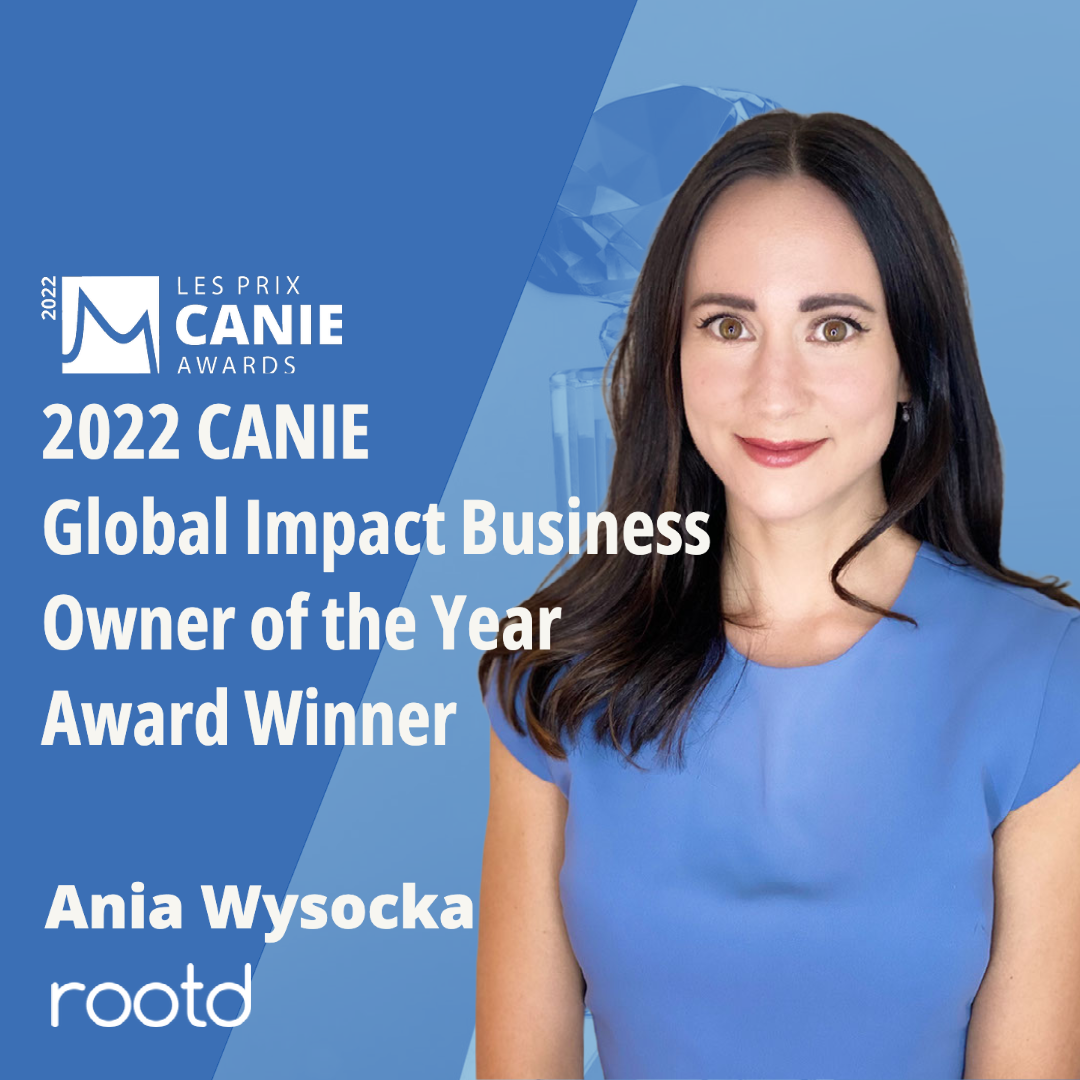 Ania Wysocka is the founder of Rootd, the #1 rated mobile app for anxiety & panic attack relief. Ania designed and created Rootd’s complete content and has led the business to over 1.8 million users globally, spanning across 150 countries. Her unique combination of graphic design skills and subject matter expertise provide Rootd with its unmistakable personality and uniqueness.

Ania is also Program Director for the BC-based incubator Alacrity Canada, where she leads a digital marketing bootcamp in partnership with the BC provincial government that has educated over 6,000 BC residents since 2019.

Simply Rooted Media Inc.’s application (app) Rootd is the #1 ranked mobile app for panic attack and anxiety relief on both iOS and Google Play. Used by millions of people around the globe, Rootd offers users in-the-moment support during the onset of a panic attack, and provides short and long-term lessons and interactive Cognitive Behavioural Therapy-based guided exercises to reduce anxiety and the effects of panic attacks. 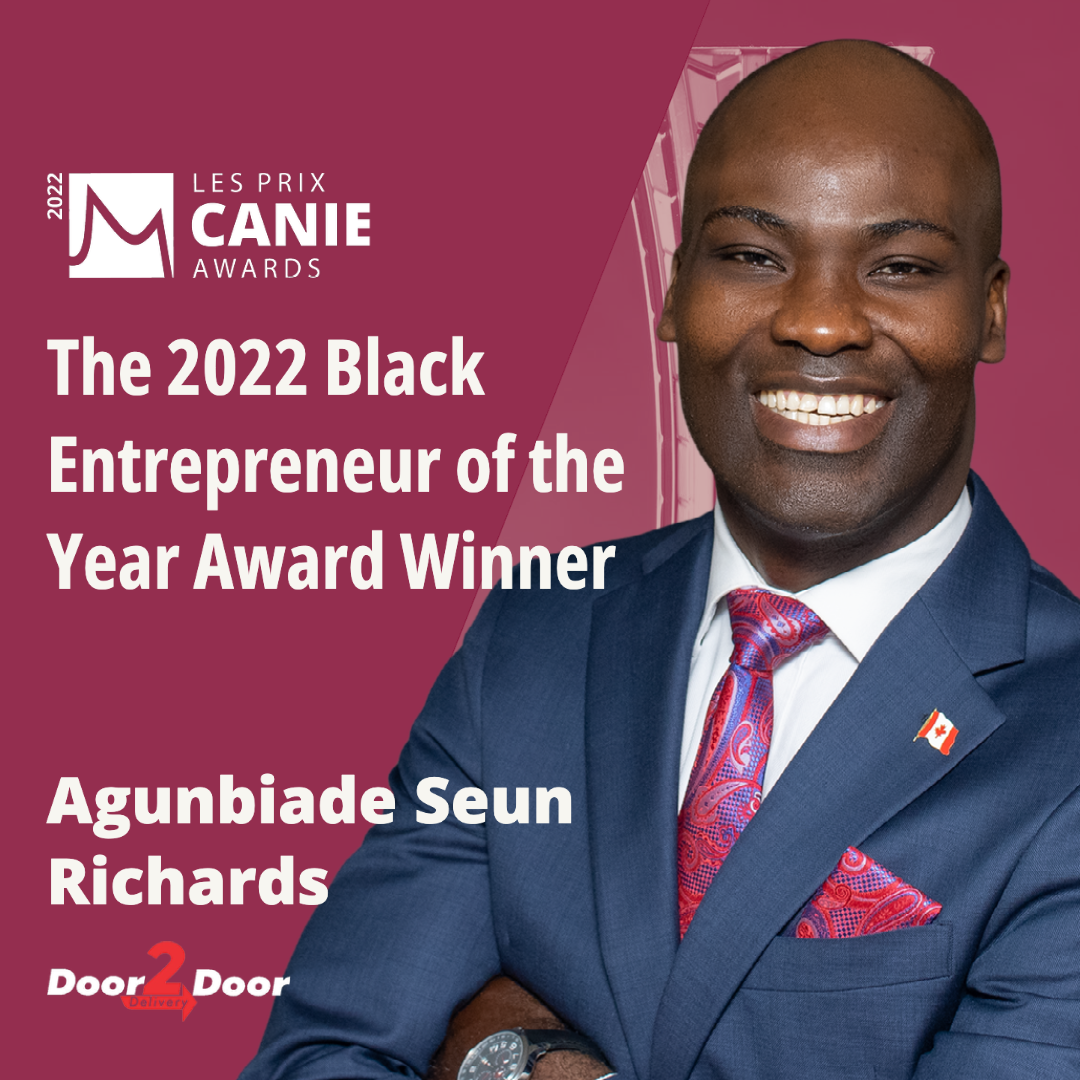 Agunbiade Seun Richards is a social entrepreneur, researcher, and community volunteer. In December 2019, he established Door2Door Pickup Couriers in Saint John, New Brunswick as part of his academic project as a Ph.D. student. Little did he know that the Covid-19 pandemic was about to shake the world, and delivery services were going to be regarded as essential for living during the lockdown crisis.

ABOUT DOOR2DOOR PICK UP COURIERS

A long-term goal of growing Hero Dog TreatsTM is to provide a safe work environment with professional support where veterans can work amongst peers to help ease the transition. They also support Canadian Service Dogs because they understand the power of “man’s best friend” in healing. 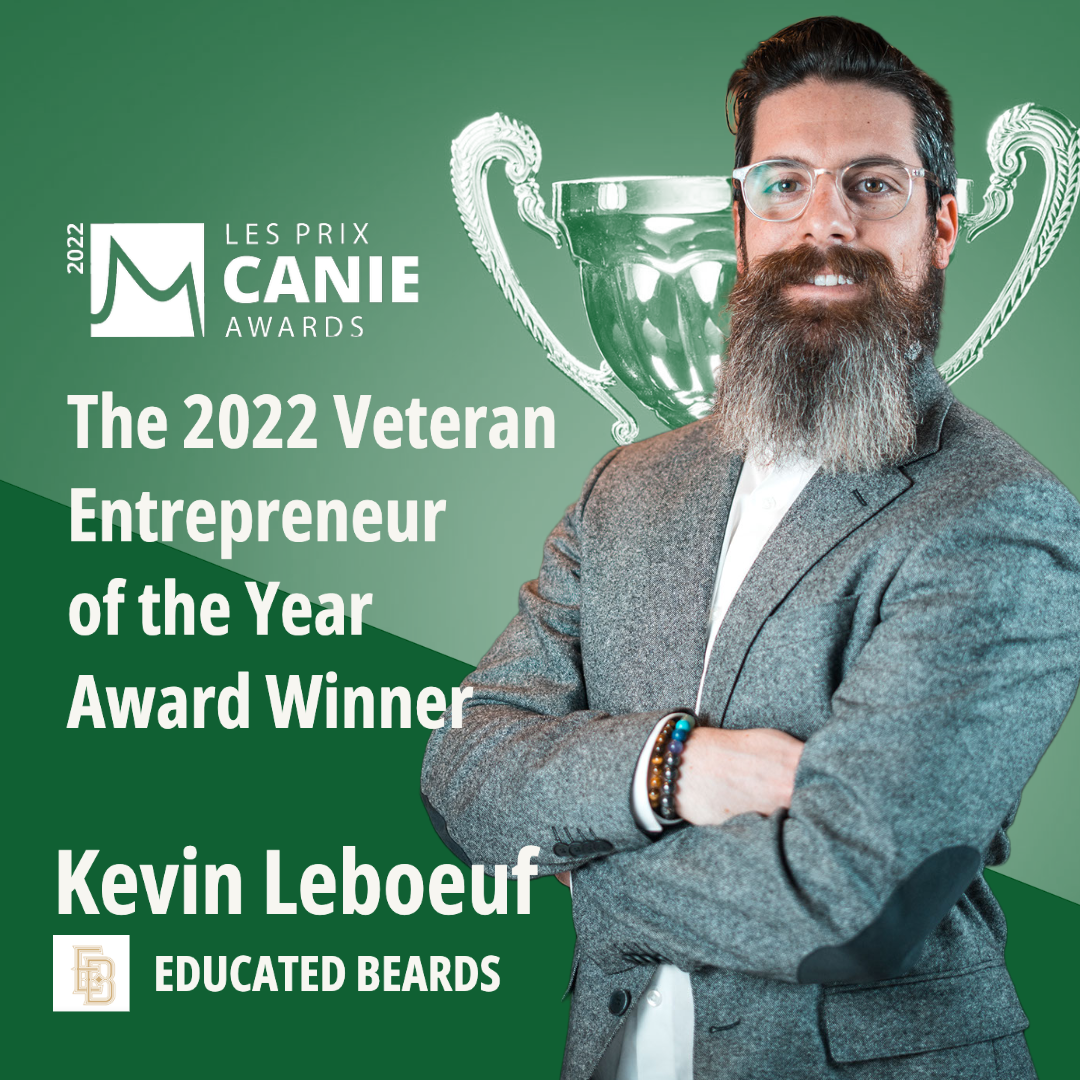 Kevin joined the military at 18 and was deployed in Afghanistan at the age of 19 with TF 3-08 as an EROC operator. Kevin’s military carrier was slowed down after being involved in an IED strike where his vehicle was bombed. After completing a 9-month tour, Kevin specialized in a high-risk search which consisted of a small, specialized team of 25 members. In 2016 he was promoted to Master-Corporal and was released from the CAF the same year for medical reasons related to PTSD.

This led Kevin to grow a beard for the very first time in his life. He liked the beard but did not like how itchy and dry it was. After months of research and development for effective organic beard grooming products made with the highest quality ingredients available in the world, Educated Beards was born Dec 2017. Kevin considers himself a serial entrepreneur and is currently the Co-CEO and Co-Founder of Educated Beards Inc., an all-natural and organic men’s grooming product company located in Atlantic Canada. Kevin has taken his passion for wellness and curated a line of organic men’s grooming products that are effective, conscious, and safe for humans of all ages, pets, and the environment.

Educated Beards is a leader in the industry of conscious men’s grooming. A brand that sets the standard for effective, organic, and premium products. They promote awareness of the importance of using clean, conscious, safe, and quality ingredients and living an educated lifestyle.

Educated Beards helps folks take care of their looks by manufacturing and supplying grooming products that are clean, conscious, safe, and top quality. They produce 100% natural and organic grooming products. 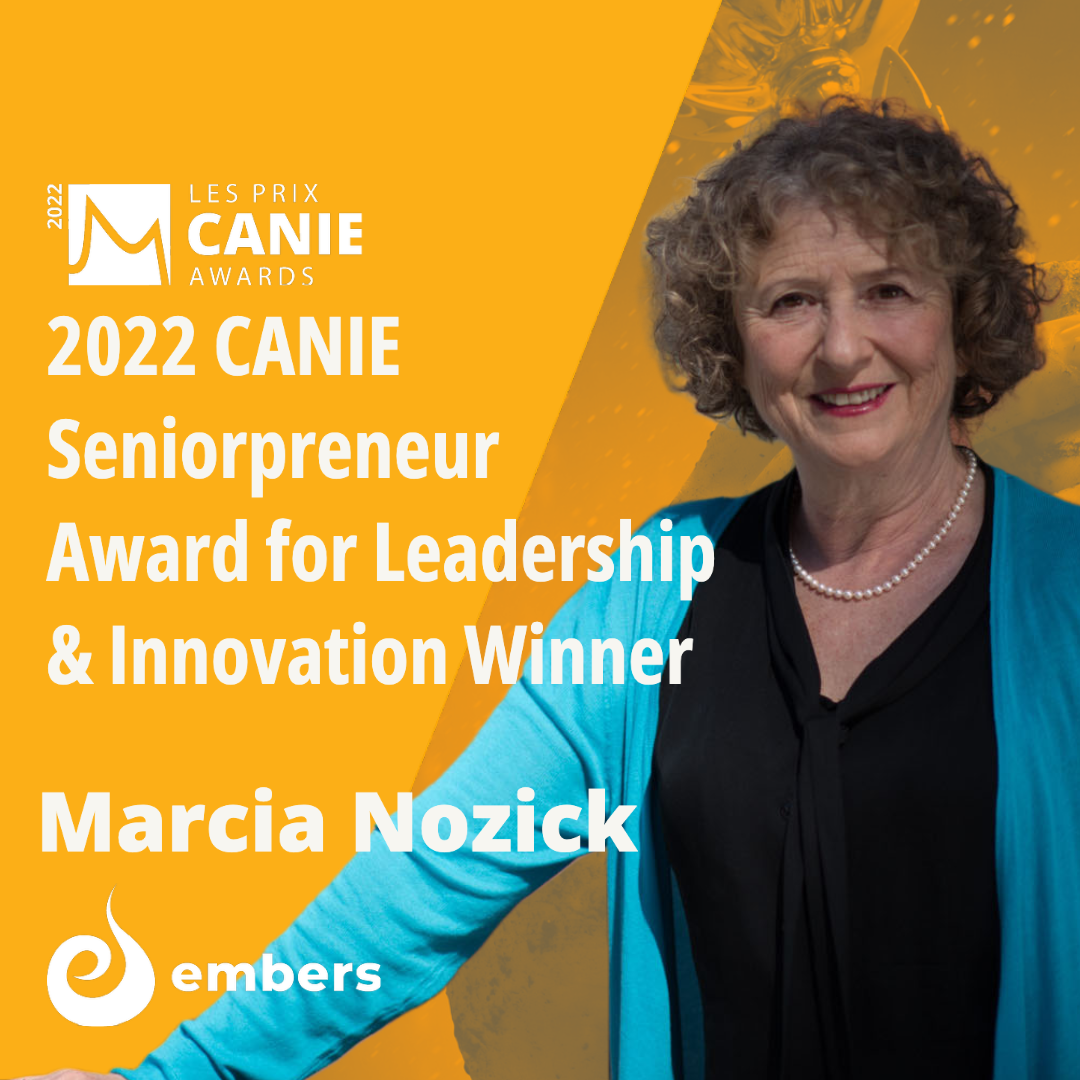 Passionate to make a difference in her city and community and frustrated with the lack of support provided to Vancouver’s housing-insecure population, Marcia set out to found and operate the charity EMBERS, the Eastside Movement for Business and Economic Renewal Society.

An innovative leader, Marcia has been recognized nationally for her passion and contributions to the fields of community economic development and social enterprise. In 2015, she won the RBC Canadian Women Entrepreneur Award for Charitable Giving. The following year, she received the YWCA Women of Distinction Award for the Community Champion category. In 2020, Marcia received the prestigious Governor General’s Innovation Award followed by the BC Achievement Community Award in 2021. Most recently, Marcia has won the BC CEO Award for Lifetime Achievement in addition to the Stevie Awards for Women in Business.

Prior to founding EMBERS, Marcia was the coordinator of Healthy Communities in Winnipeg, the associate editor and publisher of City Magazine and an instructor of Community Economic Development at Simon Fraser University. She holds a master’s degree in City Planning, and wrote the influential Canadian book, No Place Like Home: Building Sustainable Communities (1992) that David Suzuki praised as “A must read.”

EMBERS, the Eastside Movement for Business and Economic Renewal Society, is a social enterprise and registered community economic development charity located in Vancouver’s downtown Eastside, one of Canada’s poorest neighbourhoods.

EMBERS works to combat poverty and assists in the revitalization of Vancouver’s Downtown Eastside through social enterprise and community-based business development. Their mission is to empower people living on low incomes to be economically self-sufficient and develop productive futures. 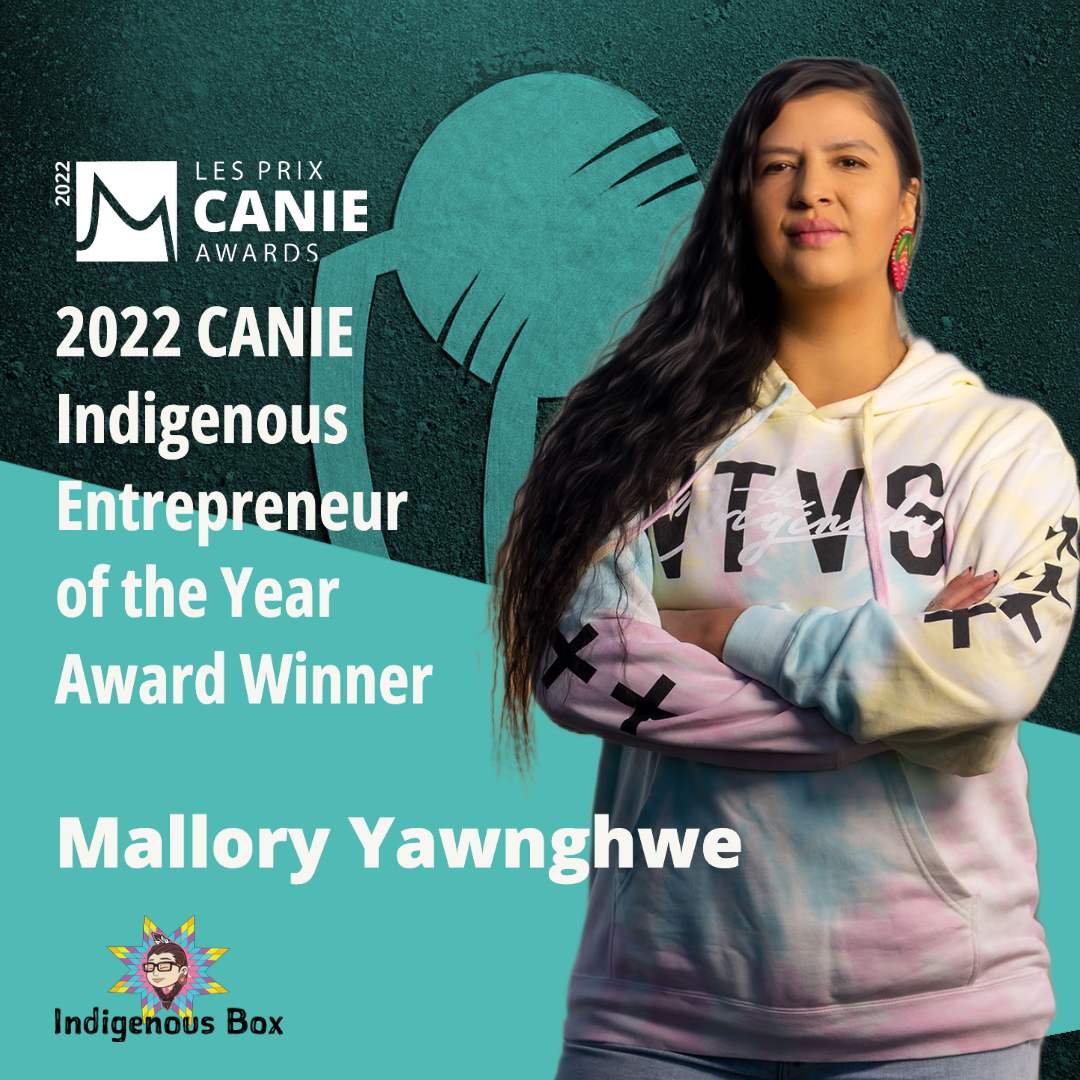 INDIGENOUS ENTREPRENEUR OF THE YEAR, SPONSORED BY INTUIT CANADA

Indigenous Box is owned and operated by CEO Mallory Yawnghwe. Guided by great purpose, this formerly shy and nervous girl from the Saddle Lake Cree Nation #125 has accomplished things that she never believed to be possible.

Mallory, of the first generation in her family to not attend residential school, earned her Bachelor of Commerce in Supply Chain Management. She honed her Supply Chain Management skills and shared her knowledge and community connections as a consultant for various projects. Now Mallory has taken on her biggest challenge yet: Indigenous Box Inc.

They are guided by values based on the teachings of shared abundance through reciprocity and connectedness. At their core is a commitment to transparency, fairness, humility, continuous learning, and bold action. 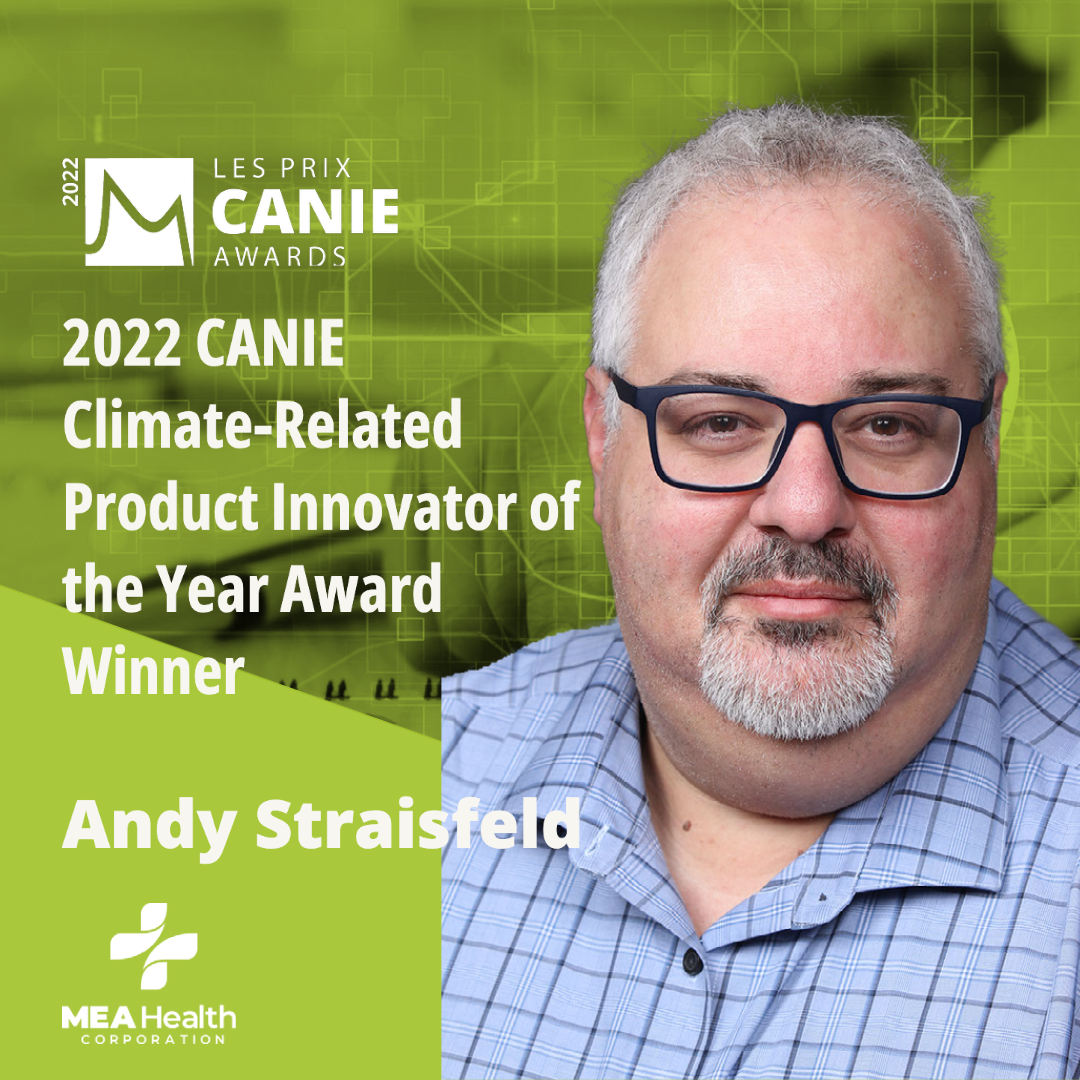 CLIMATE-RELATED PRODUCT INNOVATION OF THE YEAR AWARD, SPONSORED BY UPS

Before founding MEA Health, Andy had a successful +15-year career in medical sales with a life-long dedication to promoting green practices as an environmentalist.

While working in the medical sales industry, Andy became aware of the immense waste that was created by plastic PPE. His dedication to our environment inspired him to develop a greener solution. After years of global research, Andy founded MEA Health in 2021. Its tremendous success has allowed Andy and his team to open a second facility in Brantford, Ontario.

As a pioneer in this field, MEA Health Corp. has developed a process that prevents tons of plastic PPE waste from inundating landfills while generating a recycled source of materials for the plastics industry, providing low cost recycled options.

Congratulations to all of our Phase Two 2022 CANIE Award Semi-finalists. We look forward to celebrating the inspiring stories of each entrepreneur and their business over the coming months.

Presented in Partnership with UPS

Visit the CANIE Awards Page
Are you a business owner from an underpresent or marginalized group? Please share your stories and experiences with us. info@ief-fie.ca | awards@ief-fie.ca

We support and celebrate entrepreneurs and innovators in all recognized, racialized communities in Canada.